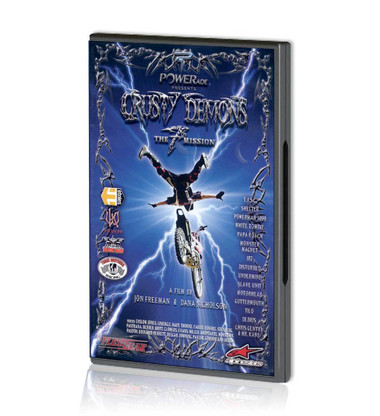 Crusty Demons: The 7th Mission is the latest installment in the groundbreaking Crusty Demons series, launched in 1995. Directed by Jon Freeman and Dana Nicholson, the film features their trademark fast-paced style and an innovative Heli-Moto segment where helicopters transport dirt-bikes up insanely steep Canadian mountains so fearless riders can let loose on uncharted trails. The film also chronicles the Crusty World Tour, a live show shot on location throughout Australia, which highlights the antics that Crusty is so well known for and presents top riders performing tricks for crowds of enthusiasts. Crusty 8 showcases more wild wipeouts than ever, due in part to a cast of daring riders and incredible stunts. Features riders such as Seth Enslow, Mike Jones, Larry Linkogle, Carey Hart, Jason Thorne and Ronnie Faisst with Bubba, as well as a pumping soundtrack with songs from Disturbed, Motorhead, Papa Roach, Powerman 5000, White Zombie and more, have made Crusty Demons: the 7th Mission another enormous success both critically and with extreme sports fans.

This product hasn't received any reviews yet. Be the first to review this product!