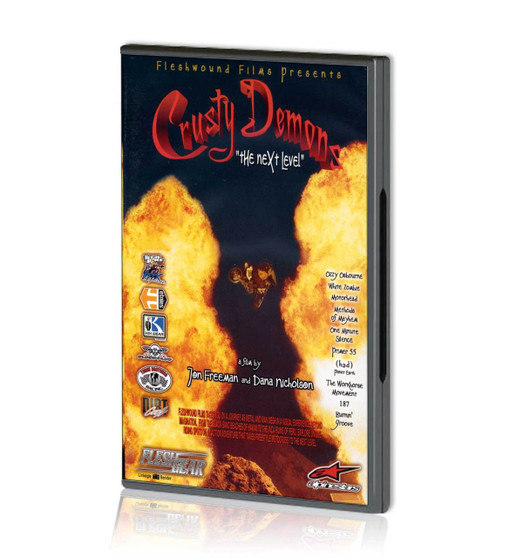 Crusty Demons: The Next Level is the follow up release to the successful action sports feature Crusty Demons Of Dirt. This feature follows the same successful formula of massive jumps and stunts set to a music soundtrack. During this feature there are numerous shots of people riding BMX bikes and snowmobiles as well as the more familiar dirt bikes. Seth Enslow returns in this feature and shows why he has become one of the most recognized people associated with this sport. During the feature we briefly see Seth's world record attempt to jump his friends house, as well as an attempt by Paul Fernandez on a BMX bike to jump onto an apartment roof after being pulled up to speed by a car.

Crusty Demons 5: The Metal Millennium includes footage from exotic locations all over the world; inc…

Continuing the popular series from Fleshwound Films, this highlight video shows some of the more ins…

Newly re-released in their original down ‘n’ dirty way, this volume of Crusty Demons her…

Crusty 13 Unleash Hell DVD takes you on a journey throughout Australia, New Zeland, and Canada. Witn…

They Are Back! Jumping Dirt Bikes Over Fire,Buildings,And Any Thing In Their Way. You Name It They'v…

Another year and another amazing Crusty adventure. This time we feature the world's best fmx riders …